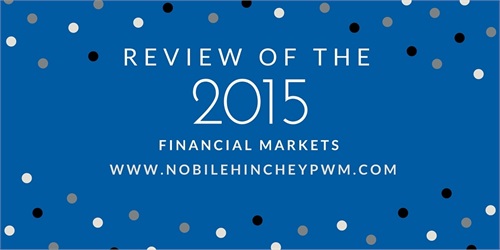 The beginning of a new year gives us the opportunity to look back at the previous year and reflect on all that happened. For the financial markets, 2015 was a challenging and whirlwind of a year. While we can’t know for sure how this will affect 2016, we can see which factors significantly influenced the markets and where we stand today. Let’s take a look at a few of the impactful financial events of 2015:

In mid-December, the Fed raised interest rates for the first time in nearly 10 years, announcing that the increase reflected the confidence it had in the U.S. economy’s strength. The Fed also shared that future rate hikes would come at a gradual pace over the next three years. The 0.25 percent hike resulted in skittish markets. Within two trading sessions, the markets turned lower and investors turned to high-yield bonds. As a result, short-term rates on bonds will likely increase. Lower commodity prices and rising interest rates led to a sharp sell-off of high-yield bonds. Credit worries already spilled over into the stock market and may continue to affect bond and stock markets.

Oil prices were volatile throughout 2015. While in mid-June 2014, Brent Crude closed at $115.19, in December 2015 that number dropped to $37.08. While this means we fill up at the gas pump for lower prices, weak demand for oil may signify a possible sign of a global economic slowdown. These declines in oil prices weighed heavily on the stock market and high-yield bonds. The continued price weakness could be a negative for stocks.

While the global economy struggled, the U.S. economy improved in 2015. The year ended with a 5.0% unemployment rate (compared to 5.7% in January 2015), 2.3% rise in hourly earnings, and 2.5 million new jobs. Many economists project that economy grew 2.2% between October and December 2015. Across the globe, emerging markets (such as Brazil, Turkey, and South Africa) struggled economically, as they were hit with increased interest rates and debts. China also suffered when, in August, the Chinese central bank devalued the yuan. This resulted in a market correction, with the S&P 500 dropping 11% between August 10th and 25th.

While it’s impossible to predict what the markets will do, Wall Street analysts are cautious about stocks and predict an average growth rate in 2016. Many economists predict the U.S. economy will continue to grow in 2016, but it will face challenges due to global challenges.

At Nobile Hinchey Private Wealth Management, we believe it’s more important to focus on your personal financial goals, rather than try to predict what will happen in the markets. If you have questions on where you stand financially, call our office at (860) 659-5977 or email me at mnobile@nhpwm.com to discuss. We look forward to hearing from you and wish you health and happiness in 2016!