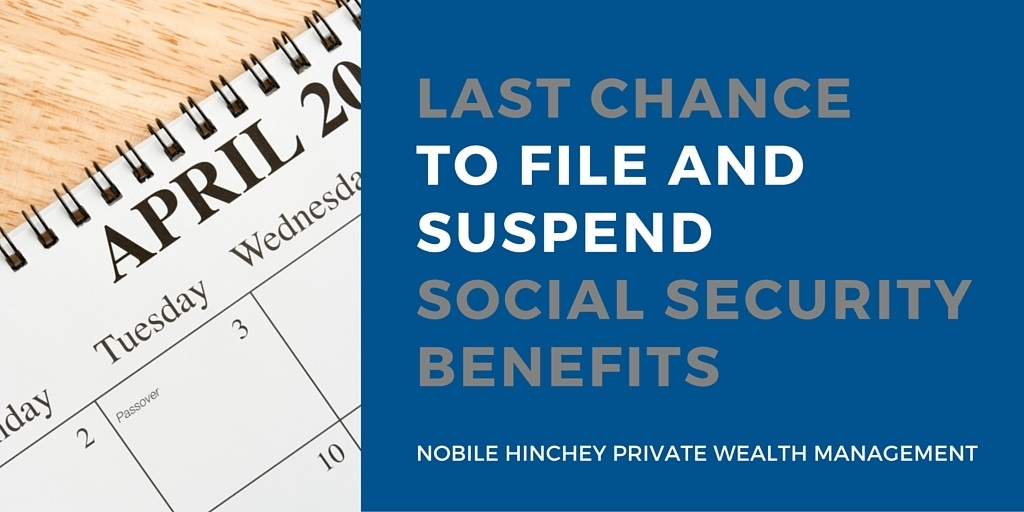 The last-minute budget and debt ceiling deal that the House and Senate passed in late October will make significant changes to Social Security benefits. In an effort to decrease spending, Section 831 of the new budget slashes benefits for those using popular claiming strategies. Some experts have estimated that the changes are equivalent to a decrease of $50,000 in lifetime benefits for many retirees. However, there is still time to take advantage of the file and suspend claiming strategy to maximize overall benefits for some who are close to retirement.

The File and Suspend Strategy

Fifteen years ago, the Senior Citizens Freedom to Work Act provided an option for “voluntary suspension” of benefits, allowing those taking Social Security benefits to stop receiving payments and earn delayed retirement credits, a practice which was termed “file and suspend.” The new budget deal eliminates this option and removes some other popular claiming strategies.

There is still a chance for those approaching retirement to benefit from the file and suspend strategy, depending on your age. However, you must submit your request to file and suspend before April 30, 2016. Anyone who is 66 or older can file for benefits and immediately suspend them, allowing their benefits to earn additional credits, which may be worth 8% per year until age 70, which can increase their total benefit by up to 32%.

Social Security claiming strategies should always be reviewed with an experienced financial professional to optimize your total lifetime benefit. If you aren’t sure whether the changes apply to you or have questions about your social security claiming strategy, call our office at (860) 659-5977 or email me at mnobile@nhpwm.com to discuss.

Michael Nobile is the CEO of Nobile Hinchey Private Wealth Management, an independent financial services firm serving high-net-worth families and business owners near Glastonbury, Connecticut. Michael brings 35 plus years of experience in the wealth management industry and is extremely knowledgable in retirement income and tax advantaged strategies. Outside the office, Michael enjoys time with his wife, two children, and two grandchildren. Longtime Glastonbury residents, they now reside in East Hampton. It’s Michael’s dream to introduce his grandchildren to his business and work together someday.